The End of a Road Paved with Good Intentions 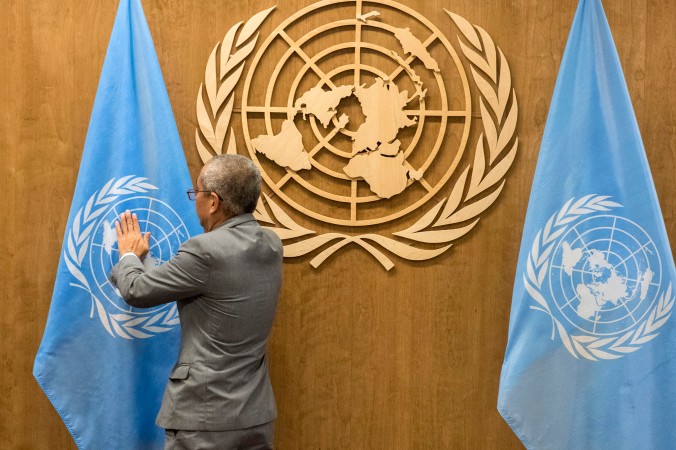 President Trump gave his first address to the United Nations General Assembly on Tuesday, September 19, 2017. From all accounts, it was a bold and forceful speech. He challenged the ambassadors and other leaders present to stand strong against the twin threats of North Korea and Iran.

It has been noted that “the road to Hell is paved with good intentions.” I offer the following as an assessment of the current state of the U.N. and how far down that road it has traveled. We should know just who our president, and our nation, is dealing with today.

When I was in eighth grade our Social Studies class performed a mock session of the United Nations as an assignment. Each person was to be a delegate from a member nation and we were allowed about two weeks for research before the mock session. The students were given the assignments by the luck of the draw. My assigned nation was the USSR. Note for some mellinials: That stands for the United Soviet Socialist Republics. A conglomerate of Russia and several Eastern European nations which fell apart in the early 1990s. I thoroughly enjoyed the assignment and prepared as I had never done before. I even went to our foreign language teacher, who was of German heritage and fluent in Russian, and she translated my speech into Russian and instructed me on how to properly speak the words.

From that moment on I became fascinated with the United Nations. In the intervening years, that fascination has turned to disgust and alarm. I used to believe the United Nations was a good organization. I now believe it is thoroughly corrupt and very dangerous to our nation and the world. This series of articles will explore the reasons for my change of heart.

WE THE PEOPLES OF THE UNITED NATIONS DETERMINED
to save succeeding generations from the scourge of war, which twice in our lifetime has brought untold sorrow to mankind, and
to reaffirm faith in fundamental human rights, in the dignity and worth of the human person, in the equal rights of men and women and of nations large and small, and
to establish conditions under which justice and respect for the obligations arising from treaties and other sources of international law can be maintained, and
to promote social progress and better standards of life in larger freedom,
AND FOR THESE ENDS
to practice tolerance and live together in peace with one another as good neighbors, and
to unite our strength to maintain international peace and security, and
to ensure, by the acceptance of principles and the institution of methods, that armed force shall not be used, save in the common interest, and
to employ international machinery for the promotion of the economic and social advancement of all peoples,

However,as time passed it became the case that nations with deplorable human rights practices under totalitarian rule began to dominate the both the General Assembly and the Security Council. The result has been a true example of the road to Hell being paved with good intentions.

The corruption of the United Nations today is summed up with a couple of recent examples. The lesser known of these is the “Cash for Kim”scandal which began garnering attention in 2007. According to the New English Review, the United Nations Development Program (UNDP)

had been funneling hard cash to Kim Jong Il’s regime, storing counterfeit $100 banknotes in its office safe and, with North Korea then on the UNDP board, was using development funds to buy business class tickets for North Korean officials to attend board meetings in New York. …A Senate subcommittee investigation…further discovered, as disclosed in a January 2008 report,that the UNDP in North Korea had transferred funds to North Korean front entities involved in arms and nuclear proliferation networks.

The total amount of funds transferred in this manner is not clear, but it amounts to at least hundreds of millions of dollars. These funds were to be used for food, clothing and education for the North Korean people. However, while North Korea was itself on the board of the UNDP, these funds were given to dictator Kim Jong Ill’s regime with virtually no oversight.

Of all the recent examples of corruption, the largest and most infamous of these is the “Oil for Food” scandal during Sadaam Hussein’s murderous rule of Iraq. Beginning with good intentions, this program became a gigantic money-laundering scheme which funneled:

Money to be used helping Iraqi families with food and medicine instead made the man with the solid gold toilets in his palace a multi-billionaire! Of course, other Iraqi and U.N. ‘officials’ were enriched as well. The ill-gotten gain here would make even Bernie Madoff blush!

These represent only a sample of how far corrupt the United Nations has become. We will see more of this in the next part of the series and try to answer the question of why such a once worthy idea became a horrendous reality that poses a danger to both peace and freedom around the globe.