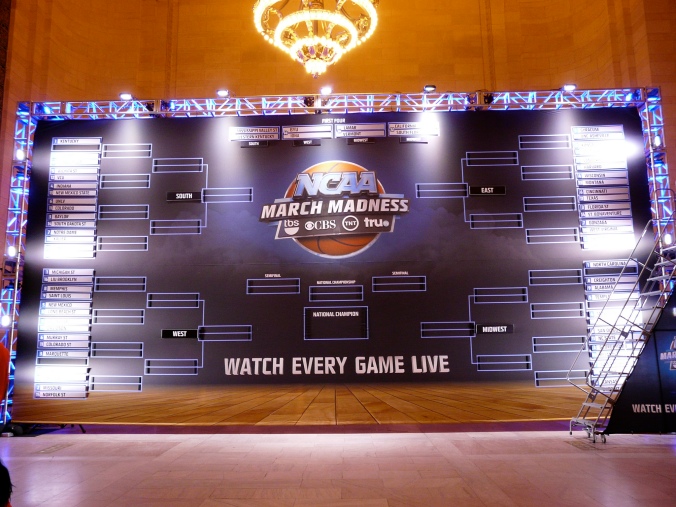 “March Madness” is upon the land! The amazing annual NCAA Men’s basketball tournament will once again capture the attention of multiple millions of hoops fans across the nation. Here are a few picks and a preview of the action as the 64 tourney teams take to the hardwood on Thursday, March 15, 2018.

The No. 1 seeds in each region for 2018 are Virginia Cavaliers in the South, Villanova Wildcats in the East, Kansas Jayhawks in the Midwest, and Xavier Musketeers in the West. The emergence of Virginia was a surprise to virtually everyone last year. However, the pre-season pick for a Final Four appearance and National Championship is the third seed in the Midwest Region, the Michigan State Spartans. According to ESPN,

Indeed, 9 of the 28 ESPN experts picked Michigan State, which was the highest agreement. Next in line of teams favored to win it all was Virginia, whom 8 of the experts picked. Yes, the same Virginia no one had picked before the season.

Other popular picks included Villanova with 5 votes on ESPN and a consensus favorite to win at Sports Illustrated. The Duke Blue Devils were a favorite pick of CBS experts. According to oddsmakers, Villanova is favored to win it all, closely followed by Duke, Virginia and Michigan State.

There are both worthy contenders and potential spoilers scattered among the various experts. Contenders would include teams that are perhaps capable talent-wise to get to the Final Four in San Antonio, Texas on March 31st, and could win the title three nights later.

Some of these teams have been mentioned by a few of the various experts above. These include Arizona, North Carolina, Purdue, Michigan, and even the Gonzaga Bulldogs, a No. 4 seed in the West Region.

The teams who can spoil the dreams of a Final Four and Championship are numerous. The spoilers will emerge in the first two rounds, and will probably fade out before the Regional Finals. Some of the teams with spoiler potential in the first round include No. 12 Murray State taking down No. 5 West Virginia in the East; 14 seed Wright St. eliminating 3 seed Tennessee, and No. 5 seed Clemson getting knocked off by No.12 New Mexico St.

Regional Finals, aka The Elite Eight

No team lower than an eighth seed will win an Elite Eight game. It has never happened before and it won’t this year.

Second, there will be no all No. 1 seed Final Four. Even if all of them make it to the Regional finals, it is unlikely they will all win and advance. That has happened just once.

Even with the successes of No. 1 seeds in the Final Four and championship game, there has only been one Final Four in which all four top seeds from the field made it: 2008, when Kansas, Memphis, North Carolina and UCLA were all there.

Here are my picks for the Regional Finals of 2018. In the South Region, No. 1 seed Virginia will meet the No. 2 Cincinnati Bearcats for the Title. The East region will also feature a No. 1 vs. No. 2 matchup with Villanova battling the Purdue Boilermakers. The Midwest Region will continue the trend as No. 1 Kansas will face No. 2 Duke. The West will shake up the pattern as the No. 3 Michigan Wolverines will square off against No. 4 Gonzaga.

No. 1 seeds Virginia, Villanova, and Kansas will advance and the interloper of the Final Four will be the Gonzaga Bulldogs. It is rare that there are three No. 1 seeds in a Final Four, but it has happened five times before. However, there is very stiff competition in every region. Some of the seeds down to No. 4 or 5 have the talent to merit a No. 1 seed. Duke and Michigan St. are prime examples of lower seeded teams who are threats to the teams seeded above them.

Which teams will prevail in this future scenario? I think I will save any further prediction until the Regional finals. However it turns out, March Madness will be a grand event for the basketball fan everywhere it is seen. Sit back and enjoy, it’s going to be fun.

All other sources linked