President Donald Trump pulled the security clearance of Obama’s former head of the Central Intelligence Association John Brennan on August 16, 2018. According to the Left, this was a violation of Brennan’s First Amendment right to free speech.

Moreover, this is just the latest egregious move by the president to silence dissent if you believe the screeching of leftists in politics and the Leftmedia.

Yet, the facts do not support their complaints against Trump. Rather, they show that the Left routinely abuses the First Amendment for their own purposes.

The Form of the First Amendment

The text of the First Amendment reads,

Congress shall make no law respecting an establishment of religion, or prohibiting the free exercise thereof, or abridging the freedom of speech, or of the press, or of the right of the people peaceably to assemble, or to petition the Government for a redress of grievances.

The Left of recent years has engaged in abuse of at least four of those rights. Here we will examine the first two of these leftist abuses of the First Amendment.

Abuse of the Freedom of Religion

The first freedom delineated in the First Amendment concerns religion.

Congress shall make no law respecting an establishment of religion, or prohibiting the free exercise thereof…

Every freedom is qualified by the condition that “Congress shall make no law…” which would restrict that freedom. The tragedy of modern jurisprudence is that this meaning has been expanded and twisted out of recognition, but that’s another article.

The Left in America has consistently abused the free exercise clause. This is done by claiming that almost any public venue must be free from religious expression, or the government is endorsing or establishing a religion.

A recent episode in Colorado illustrates the Left’s determination to abuse the freedom of religion. It involves the Masterpiece Cakeshop owner Jack Phillips.

Phillips had recently won a case against the Colorado Human Rights Commission at the Supreme Court. The Commission attempted to force him to bake a wedding cake for a same-sex wedding against his religious beliefs.

SCOTUS rightly recognized that the government could not force Phillips to act against his sincerely held religious faith. Now, the Commission is after Phillips at the behest of a transgendered person who desired a cake to celebrate his ‘transition’ to female.

After the case of Masterpiece Cakeshop owner Jack Phillips went all the way to the Supreme Court, he is in yet another asinine legal battle after refusing to bake a cake celebrating a person making a transgender conversion.

This newest idiocy serves only the purpose of trying to destroy religious opponents of the Left. It is outlandish enough for even leftist comic Bill Maher to pose a pertinent question in partial jest during his monologue.

“Is there only one bakery in Colorado?” Maher asked.

The obvious implication is that this particular bakery is being targeted by the Left’s anti-religious idealogues. That is abuse in its very essence.

A Selective Defense of Freedom of Religion

However, in even more recent times the Left has taken to defending, the public expression of one religion, the religion of Islam. Here is one case from a recent article by Pamela Geller about a pro-Islam piece in USA Today.

“So, what actually subjugates Muslim women? It’s not Islam or hijab, but instead racism and Islamophobia.” So says Dalia Mogahed.

The sharia, which mandates that women cover their hair, is the only brutal, murdering ideology that gets such overt support. What other ideology that oppresses, persecutes, and subjugates gets such sanction? Whereas the crime is not condemned, just those pointing out the crime

Why, indeed does the Left seem to make an exception for Islam? Is it their own fear of seeming intolerant to a minority? Whatever the reason, there is a bitter irony in this action.

Should Islam succeed in its goals in America, the freedoms the Left says they value will be snatched away in an instant. Today’s naive idealist followers of an ephemeral Marxist paradise are no match for the ferocity of Jihadists nor the strictures of Sharia law.

Abuse of the Freedom of Speech 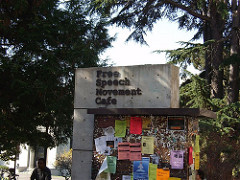 The next bit of the First Amendment adds this to the list of freedoms Congress can’t touch.

…or abridging the freedom of speech

A plain reading of this amendment reveals that Congress, now judicially interpreted to mean the government at any level is not allowed to censor speech with certain exceptions.

For example, speech that might incite a violent riot or uprising is not protected by the First Amendment. Therefore the government can intervene to silence such speech.

The Left engages in abuse of this freedom in particular perhaps more than any other. Their tactics are simple.

Leftists loudly critique any speech from political or cultural adversaries and demand they be silenced. However, any methods the Left employs, including violence, are pushed as legitimate expressions of free speech.

There has been a multitude of examples which really began to up the violence quotient starting in 2017 with the rioting of Antifa at the University of California, Berkeley. This violent ‘protest’ was severe enough to prevent one Milo Yiannopoulos, a gay conservative, from speaking there in February of 2017.

Silencing the Opposition in the New ‘Public Square’

Modern technology has provided another tool for the Left to attempt suppressing free speech from conservatives. The public square is no longer the open arena.

Social media has become the new ‘public square’ for America and the world. The meteoric rise of Facebook, YouTube, and Twitter allowed expressions and opinions to flow freely, at least initially.

That freedom spurred almost exponential growth. At first, the voices of the Left were dominant and conservatives were tolerated because of their relatively small numbers.

The conservative presence on social media began to grow rapidly and steadily gain influence. This was especially the case during the eight years of the Obama administration.

However, it took the surprise election of Donald Trump to propel the Left toward the silencing of conservatives in the new public square. In their view, it was the conservatives who prevented Hillary Clinton from being elected, and that was intolerable.

It also awakened the Left to the sizeable social media clout being wielded by conservatives and the effectiveness of their critiques of leftist philosophy and policy. The Left is now responding in the only way they can.

Since they can’t prevail in the war of ideas, they attempt to shut down opposing speech on the internet. A most egregious instance of this is the virtual banning of videos from Prager University by YouTube and Facebook.

The Case of Prager University

One of the first reports about possible censorship of Prager’s material concerned the ‘banning’ of some videos on YouTube’s platform in October of 2016. It began with a relatively small number, 21, of the educational videos.

YouTube has gotten in on the anti-conservative act. Prager University, which was created by conservative radio host Dennis Prager and offers short educational videos on a variety of topics from a Judeo-Christian perspective, has charged that Google-owned YouTube has been censoring a number of its educational videos by classifying 21 of them as “restricted.” Video titles such as “Are the Police Racist?,” “What ISIS Wants,” “Did Bush Lie About Iraq?” and “What is the University Diversity Scam?” have landed under YouTube’s “restricted mode.”

Prager’s short presentations involve a multitude of subjects and have never featured violence, any exhortations to violence, rudeness, sexually inappropriate material, racism, or vulgarity of any kind.

Here is one of Prager University’s offerings that are not “restricted” by YouTube at the present.

Last Thursday, Prager University issued a public statement alerting its millions of Facebook followers to the fact that “our last 9 posts have been completely censored reaching 0 of our 3 million followers.

Facebook later apologized for this claiming that the censoring was a “mistake.” However, the harm was done, even though Facebook restored the videos. Moreover, they still have not explained how this “mistake” happened. Thomas Gallatin offers a reasonable explanation.

It’s increasingly clear that Facebook’s post-2016 algorithms are tilted against conservative perspectives, which are too easily flagged by trolls as content containing “fake news” or “hate speech.”

When the major providers of the space for a new ‘public square’ decide only one point of view is permissible, free speech is effectively eliminated there. Next time we will look at the abuse of freedom of the press and freedom to peaceably assemble, as well as possible solutions to the problem.

Why do you not understand what I say? It is because you cannot bear to hear my word. John 8:43 [ESV]