The Most Dangerous Person in Congress [Video]

There have been some very unusual happenings in the U.S. Congress since the 2018 midterm elections due to the influx of a few newcomers to political office. On the GOP side, new Representative Dan Crenshaw [R-TX] has injected an unusual amount of conservative common sense on Capitol Hill.

On the Democratic side, let’s just say that common sense is not their forte. The incoherent babblings of Rep. Alexandria Ocasio-Cortez [D-NY] are the leading examples demonstrating a lack of common sense from the Left.

What makes AOC and the others particularly unusual is their immediate bombastic demands not simply to be heard but to be considered off-limits from criticism. A prime demonstration of this attitude came immediately after AOC first offered her “Green New Deal.”

She received blistering, well-deserved criticism for the ridiculous proposal and its ‘solutions.’ Her reaction was to dismiss critics as possibly racist and sexist, and bark back that since she is the only one trying to solve this phantom problem she’s “the boss.”

However, as bad as the ideas of AOC are, there is another new member of Congress whose objectives are potentially far more hazardous to America as a free nation. That person is Representative Ilhan Omar [D-MN].

Who Is Ilhan Omar?

Ilhan Omar was born in Somalia on October 4, 1981. Her story of the family escaping from Somalia, living in Kenya as refugees, and later coming to America in 1992 and later being granted asylum reads like a script for a Hollywood production.

When she first came to the U.S. Omar spoke only Somali. However, within three years she spoke English well enough to translate for her grandfather at political events, which she took an early interest in at the age of 14.

The family moved to Minnesota in 1995, and Omar became an American citizen in 2000. After high school, she attended college at North Dakota State University and received degrees in both political science and international studies in 2011.

From 2012 to 2016 Omar dabbled in politics as a campaign manager for two successful candidates, one to the Minneapolis City Council and another to the state Senate in Minnesota. In 2016 she was elected to the Minnesota House of Representatives after her Republican opponent, who was also a Somali activist, withdrew from the campaign.

In June of 2018, Omar began her campaign for election to the U.S. House of Representatives and ultimately won an expected victory as her district

is the most Democratic district in Minnesota and the Upper Midwest.

So far, the information I have presented is missing one fact about Omar, simply because that particular item is popularly viewed as something that doesn’t pertain to her political office. This fact is that Rep. Omar is a practicing Muslim, who has demonstrated it from her first act upon arriving in Washington D.C. which was taking the oath of office on a copy of the Quran.

However, when one samples biographical information about her, the fact that she is Muslim is hardly mentioned. That is unless it is mentioned as a historical achievement to have been one of only two Muslim women ever elected to national office.

I submit that this is not only the most important thing we need to understand about Omar, it is also the thing that makes her potentially the most dangerous person in Congress today.

Why Is She Dangerous?

A man with a message.

What must be understood is that Rep. Omar is not dangerous because she is Muslim. If that were the only factor and it didn’t impinge upon her service in the federal government, no harm, no foul.

She is dangerous because she is a Muslim activist and apologist for Sharia-compliant Islam. Sharia is a formal Islamic law system that claims precedence for all Muslims and instructs them to wage ‘jihad,’ or war, against all non-Islamic people.

To be clear, Islam is not so monolithic that all sects recognize Sharia as an authoritative interpretation of the Quran. However, the country of Omar’s origin does claim deference to Sharia.

Somalia, from which Ilhan Omar hails, adheres to the Shafi’i madhhab (school of jurisprudence). A Shafi’i manual of Islamic law that was certified in 1991 by the clerics at Al-Azhar University, one of the leading authorities in the Islamic world, as a reliable guide to Sunni orthodoxy,…

This manual of Sharia, aka Islamic law, outlines the requirements of waging jihad against non-Muslims. The goal of jihad is simple; total domination of the world by Muslims.

Jihad comes in two varieties, normal jihad which is conducted with the authority of a Muslim country, and so-called “defensive” jihad, which according to Sharia all Muslims are to be engaged in today because of the conflicts of recent decades between America and various Islamic nations such as Iraq and Afghanistan.

The objection that arises at this point is this; just because Ilhan Omar is from a nation that embraces jihad doesn’t mean that she does the same. That would be correct if this was the only evidence available.

However, her actions in her brief political career reveal far more evidence pointing to U.S. Representative Omar as a dangerous Islamic terrorist supporter. Of course, she would deny this assertion if anyone had the intestinal fortitude to ask her directly but her actions speak much louder than any denials she would present.

What Has She Done?

There are a plethora of actions Rep. Omar has exhibited from her earliest dabbling into politics until the present that strongly suggests she supports Islamic terrorists.

Right after she was elected as a Minnesota state legislator, she actually pushed a judge for lenient sentences for nine men who tried to join the Islamic State group

In a similar manner, Omar got right to work as a Congressional office-holder by disparaging Israel at every opportunity. During her first couple of weeks in Congress, Rep. Omar

…made anti-Semitic remarks. She supports BDS. She’s defended the noxious Black Hebrew Israelites against the Covington Catholic kids, saying that the notoriously racist sect were actually the victims at the March to Life brouhaha. 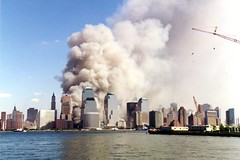 Just a few days afterward, Omar proposed that the Department of Homeland Security should be defunded. This Cabinet office, which was created as a response to the Islamic attacks of 9/11, is charged with interdiction of terroristic threats against America and she wants it shut down.

Late in March Omar gave a speech at a fundraiser for “Muslim Empowerment,” sponsored by the Council of American-Islamic Relations [CAIR] which dismissed the 9/11 terror attacks by devout Muslims as “some people did something.”

This outrageous comment should disturb any real American, yet, as seen in the following video, her cohorts in Congress go to the matt defending her. Moreover, her advocates jump right to the Left’s favorite smear of conservatives, that they are racist.

Rep. Dan Crenshaw [R-TX] is a real blessing in Congress and absolutely correct in criticizing Omar and her defenders.  Of course, the Leftists in Congress are appalled that their favorite Muslim has received any backlash at all.

It should be noted that Omar was either uninformed [unlikely] or simply lied about when CAIR was founded. It wasn’t after 9/11/2001 but back in 1994 as a creation of the Muslim Brotherhood.

This has been but a sampling of many such acts that this Muslim congresswoman has committed which bring into serious question just whose side she is on. She has taken every opportunity during her short time in Congress to favor Islam and Muslim terrorists and downplay their threats to America.

Her comments about 9/11 at the CAIR conference actually tried to paint Muslims as the real victims of the attack, rather than 3,000 Americans who died and the loved ones they left behind. The fact that Omar has many supporters and defenders in Congress from the Left suggests that they either agree with her or don’t think she is a serious problem.

They are simply wrong. Rep. Ilhan Omar is the most dangerous person in the U.S. Congress today. She should be at least censured for her anti-Semitism or better removed from Congress altogether, but that is a very doubtful action especially with the current makeup of the House.

Thankfully her term in Congress is only two years so there is a chance Omar can be voted out in 2020. Let’s pray that her district in Minnesota sees the light and votes to replace her.

And Asa cried to the LORD his God, “O LORD, there is none like you to help, between the mighty and the weak. Help us, O LORD our God, for we rely on you, and in your name we have come against this multitude. O LORD, you are our God; let not man prevail against you.” 2 Chronicles 14:11 [ESV]