Special Counsel Robert Mueller made a short public statement on May 29, 2019, which confirmed the Leftist bias of the Russia ‘investigation’ and of his report. Moreover, he banished all doubt of his personal bias against the President of the United States and passed the baton to Congress to complete the attempt to destroy him.

The most remarkable part of this was that Mueller did all of that with one sentence.

If we had confidence that the president clearly did not commit a crime, we would have said so.

To the Leftist press and anyone else who believes this is somehow a plausible accusation against Trump, I would ask this question. Doe’s anyone seriously believe that if Mueller’s team did have confidence the president committed a crime, they wouldn’t have said so?

It would have been shouted from every Leftist media outlet in the world! Which, after the most thorough and hostile of investigations over two years, clearly means Mueller was indeed confident that no crime had been committed.

In other words, we couldn’t find Trump guilty of anything, but that doesn’t mean he should be considered innocent. First of all, this turns the millennia of civilized jurisprudence on its head by assuming that the individual must prove he is innocent, rather than making the state prove he is guilty.

Secondly, this gives verbal confirmation of what most conservatives have known all along, Mueller and his cohorts are Leftist anti-Trump zealots and are hopelessly and dangerously bias.

Mueller’s Investigation Was Tainted from the Start

When Mueller became the Special Counsel in the investigation of Russian interference in the 2016 election he put together a very select team of 16 lawyers to help carry it out. 13 of those were Democrats, and 3 have no political affiliation. Mueller himself is an anti-Trump Republican, of that there is now no reasonable doubt.

Thus the very makeup of Mueller’s team manifested a conflict of interest and exhibited Leftist anti-Trump bias at the beginning. Many prominent conservative commentators have mentioned this concern before, and the President himself recently mentioned that, in addition to another interesting fact about Mueller being turned down for the FBI Director’s job.

Robert Mueller came to the Oval Office (along with other potential candidates) seeking to be named the Director of the FBI. He had already been in that position for 12 years, I told him NO. The next day he was named Special Counsel – A total Conflict of Interest. NICE!

Over two years ago this whole fiasco was launched into motion by a blatantly anti-Trump panel of lawyers out to take down the President of the United States. Yet, despite their best [or worst] efforts, they couldn’t accomplish that task for the Left. 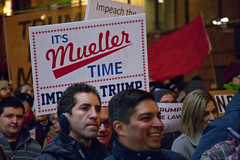 Once the Mueller report was fully released six weeks ago the Leftmedia could no longer provide any semblance of cover for failing to destroy Trump. The accurate ruling of no evidence of collusion or obstruction by the Trump campaign or Trump himself had dashed their flimsy hopes of defeating their mortal enemy.

Moreover, some of what was revealed cast grave suspicion upon the FBI in particular. Enough to raise the eyebrows of Attorney General William Barr and cause him to begin an investigation into the investigators.

This, along with the upcoming Justice Department Inspector General’s report which is expected to have bad news for the FBI, put real pressure on the anti-Trump Left. Enough pressure to scuttle their hopes to defeat President Trump in 2020.

Well never fear dear anti-Trumpers because your hero ‘Bobby boy’ Mueller came riding to the rescue with his one-and-only public statement [maybe?] about this. In effect, he opines, I couldn’t do what you and I both wanted, but I can help you punish this dastardly, horrible president.

It appears that Mueller, who also announced the closing of the office of Special Counsel and his return to private practice in his statement, gave his final gift to the Left with the suggestion of impeaching President Trump. However this may seem, it was not a move born of desperation, but a deliberate and planned effort on Mueller’s part.

The introduction to the volume two of our report explains that decision. It explains that under long-standing department policy a president cannot be charged with a federal crime while he is in office. That is unconstitutional. …Charging the president with a crime was, therefore, not an option we could consider. …the constitution requires a process other than the criminal justice system to formally accuse a sitting president of wrongdoing.

The ‘process’ Mueller means is, of course, impeachment by the House of Representatives. In effect, Mueller is saying to his fellow anti-Trumpers, I’ve done my part, now it’s your part to finish the job of destroying President Trump.

Understand that Mueller already knew from the beginning that he couldn’t actually charge the president with a crime because he wasn’t conducting a criminal investigation in the first place. He didn’t even charge the Russians because he knew he couldn’t so he sent their cases to the District Court of Washington D.C. for legal indictment.

That indictment was filed officially in February of 2018 under this heading.

IN THE UNITED STATES DISTRICT COURT FOR THE DISTRICT OF COLUMBIA …

The Grand Jury for the District of Columbia charges:

Mueller also knew from the start that his investigation would never take down Trump on its own. He knew that his real job was to provide impeachment fodder for the Democrats going into the 2020 election cycle.

The reactions of the Left politicos and the Leftmedia, as Tucker Carlson pointed out, show that Mueller was successful in passing on the impeachment baton. The clamor for impeaching President Trump is now at an all-time high in those quarters, thanks to Robert Mueller.

Now that this baton has been passed, we will see if the House will run with it. I believe they will try, and they will make the attempt relatively soon.

The Left really has no choice but to go for impeachment before the 2020 election if they do it at all. Otherwise, they will have to live with four more years of a renewed Trump administration advancing American greatness, and for them, that thought is anathema.

So, get ready for the impeachment show, America. I hope and pray that in the midst of this dangerous foolishness, the majority of the country may see the real Leftist agenda of destruction displayed as never before and reject it completely.

The wise lay up knowledge, but the mouth of a fool brings ruin near. Proverbs 10:14 [ESV]