The Leftchurch’s Corruption Manifested at Christmas

The 2019 Christmas season is once again being corrupted by the Leftward churches of ‘mainstream’ Christianity. The story of God’s only Son being born into the world is being used to fuel a TDS inspired political statement against President Trump.

The latest example has been provided by Claremont United Methodist church just outside of Los Angeles, California. In a leftist ‘edited’ version of the Nativity, the church displayed Jesus, Mary and Joseph separated in three “cages” with a clear explanation from its pastor that it is a critique of Trump’s immigration policy.

Corrupting the Nativity for Political Points

In an excellent piece for mrctv.org, Brittany Hughes notes that the Claremont pastor, Karen Clark Ristine, posted a photo of the display on Facebook and explained, 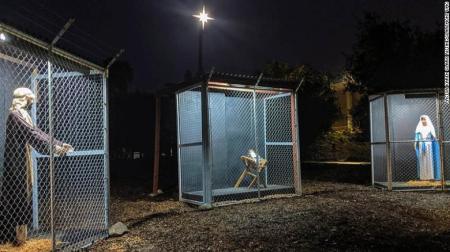 “The theological statement posted with the nativity: In a time in our country when refugee families seek asylum at our borders and are unwillingly separated from one another, we consider the most well-known refugee family in the world. Jesus, Mary, and Joseph, the Holy Family,” Ristine continued. “Shortly after the birth of Jesus, Joseph and Mary were forced to flee with their young son from Nazareth to Egypt to escape King Herod, a tyrant. They feared persecution and death. What if this family sought refuge in our country today?” she asked. “Imagine Joseph and Mary separated at the border and Jesus no older than two taken from his mother and placed behind the fences of a Border Patrol detention center as more than 5,500 children have been the past three years.”

This is not the first time such a distorted display has been featured as part of the particular church’s Christmas ‘celebration.’ A similar display in a Massachusetts Catholic church was erected last year depicting Immigration and Customs Enforcement, or ICE, imprisoning the baby Jesus,

in an ICE detention cage while the three Wise Men looked on through a border fence with a “Deportation” sign and a marker that read, “Peace on Earth?”

There are two grievous errors being made by these church organizations, and many others aligned with Leftism, with their use of Scripture. The first and most egregious is the mangling of Scripture that is on public display.

Mangling the Word of God in a Public Display

The Leftist re-imagining of the Nativity amounts to taking a page from the Scriptures and rewriting it into a political bumper sticker. These churches disregard what is actually written in favor of persuading the gullible that President Trump is more intent on murdering ‘immigrants’ than King Herod was about killing infants.

The ‘theological explanation’ behind these atrocious displays is moronic at best, and purposely deceptive at worst. It is moronic to compare Joseph, Mary, and Jesus running for their lives from Herod with people ‘claiming’ asylum who don’t meet the legal definition of a refugee.

Jesus’ earthly family were, in fact, real refugees and in their era, there was no legal system to confirm that. However, within our own immigration system, they would have met the criteria since there was ample proof they would be killed if they returned.

That cannot be said of many who attempt to claim ‘asylum’ in America now. Secondly, they did not seek to live in Egypt indefinitely and returned to their home ‘country’ once the danger had passed.

Third, the holy family did not go through many other nations that offer asylum before reaching their destination. The first choice was Egypt where God told them to go and it was the first safe haven they reached.

None of this is true today concerning the waves of illegal immigrants who claim ‘asylum’ by mouthing the words ‘credible fear,’ without anything other than the word of adults who might not even be related to the children. In some cases, they might be a relative that ‘rented’ the child to get across the border.

ICE agents found a 7-year-old girl last month who said her mother had rented her out to her uncle so they could pose as a family and he could get more lenient treatment at the border. …The ICE cases are in addition to cases detected by Customs and Border Protection. Over the first six months of fiscal year 2019 — October through March — CBP detected more than 3,500 cases of fake families

Comparing this situation to the solitary flight to Egypt by Joseph, Mary, and Jesus is ludicrous. Putting it into the context of the Nativity makes these churches left-wing political hacks unconcerned with the real meaning of Christ’s incarnation.

The Christmas season is perhaps the greatest opportunity for the Leftchurch to engage in moral preening by presenting political points masquerading as moral instruction from God’s Word. Yet, their ‘morals’ here are oddly consistent with the rest of the Left’s phony moral high ground.

The consistency is odd because the Left as a whole is consistently hypocritical when it makes its immoral ‘moral’ claims. These episodes of Nativity displays follow the same pattern.

The simplest method of showing the consistent moral hypocrisy of the Left, including here, is to examine what was being said and done in past years by the same Leftists about the same subjects they pontificate about today.

Sometimes the task is even easier than that because the Left gives itself away with its own pronouncements in the present. That is the case here, and the Claremont United Methodist pastor shows how this is done in her own words as quoted above.

“Imagine Joseph and Mary separated at the border and Jesus no older than two taken from his mother and placed behind the fences of a Border Patrol detention center as more than 5,500 children have been the past three years.”

The pastor’s last four words, perhaps unwittingly, reveal the hypocrisy of her supposedly sincere moral outrage. Her mathematical skill is solely applied toward the current administration, implying that this was not a real problem until President Trump came along.

However, the “cages” highlighted in the Nativity displays represent a phenomenon that was created and flourishing during the administration of former President Barack Obama! Yet these churches were not concerned enough about the ‘caging’ of children when Obama was in charge to demonstrate against it then, just as the Leftists in politics and the media were also silent at the time.

…in 2014, Breitbart News’s Border and Cartels Chronicles Editor Brandon Darby broke the story of how child border crossers were being crammed into detention centers and facilities by the Obama administration. These living conditions for border crossers in federal custody, depicted in exclusive photos, went ignored by the establishment media and elected Democrats at the time of their release.

These Nativity displays reveal the ever-malleable morality of the mainstream church which would rather stand with the Socialist Left every issue, particularly today when it comes to opposing President Trump at every turn.