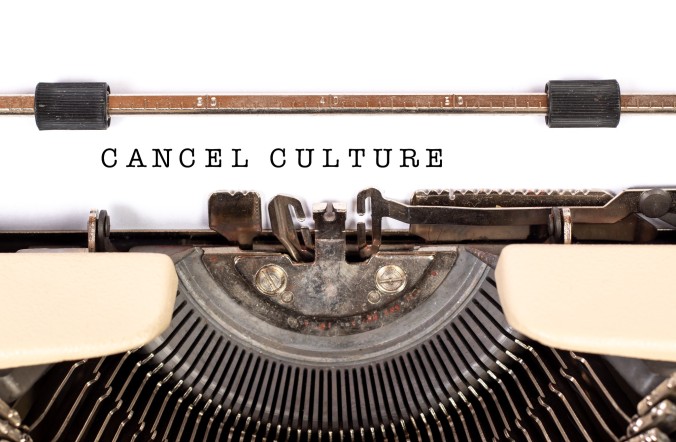 One of the more unfortunate phenomena that have come to fruition in modern society is the so-called ‘cancel culture.’ The main thrust of this Leftist effort is seen through the influence of social media minions and the main targets are leaders in society, politics, the media and, big business.

The power of ‘cancel culture’ has increased almost exponentially in 2020. The catalyst propelling this Leftist tactic was the murder of George Floyd and the immediate response with riots and by the impetus of Leftist organizations such as Black Lives Matter and Antifa.

The main weapon of this moment that is employed to incite the mob, whether a human mob or a digital mob, against conservative pushback and solutions, is the slogan sword of ‘black lives matter.’ The use of this weapon is very attractive to the Left since it can be done through social media such as Twitter and Facebook and those who wield it do not have to go face-to-face with their target.

The targets of the Leftist attacks have two things in common. They are either conservative or have made statements or performed acts that support, or that the Leftist thought police think support, conservative principles or institutions, or even if they have not supported BLM enough!

The way ‘cancelation’ works for the Left slightly varies depending on their particular target, however, the object is the same in each case. It is to cause shame and effect silence or removal upon whoever or whatever may stand in opposition to their societal and political goals.

If one is a prominent figure in conservative media, such as Tucker Carlson on Fox News, then you are targeted on social media with attacks on sponsors of the program in an effort to get it ‘canceled,’ from the network. If one is a leader in the business community, you will be monitored through ordinary and social media and if found ‘offensive’ or ‘racist’ in some manner, boycotts and shaming will be used for intimidation to try and get the certain mogul to appease the Leftist demands.

As the ‘protests’ and violence has escalated the Leftist crowd, guided and emboldened by Antifa and Black Lives Matter, has also escalated their target base to private citizens whose social media is not in concert with their goals of domination. Moreover, make no mistake, domination is their goal.

If you doubt that assertion, let me provide a couple of examples. The first comes from the Seattle, Washington occupied zone that was known as the Capitol Hill Autonomous Zone or CHAZ, but now call themselves the Capitol Hill Occupy Protest, or CHOP.

Jaiden Grayson, a CHOP ‘leader,’ made these statements while being interviewed by documentary filmmaker Ami Horowitz,

“Every single day that I show up here, I’m not here to peacefully protest,” Grayson said. “I’m here to disrupt until my demands are met. You cannot rebuild until you break it all the way down.”…“Respond to the demands of the people or prepare to be met with any means necessary,” she said. “By any means necessary. …“It’s not a slogan. It’s not even a warning. I’m letting people know what comes next.” …Grayson said that she lives by her own definition of violence. “A response to violence is not violence itself,” she said.

The method of ‘cancelation’ has now moved to include violence in an attempt to ‘cancel’ our entire current system of government and way of life. This is spelled out in graphic detail by another example from a New York City Black Lives Matter leader in an interview with Martha McCallum of FOX News.

During the interview, she asked him about his comments that he would burn the country down. He replied, “If this country doesn’t give us what we want then we will burn down the system and replace it,” Newsome replied. “And I could be speaking figuratively, I could be speaking literally. It’s a matter of interpretation.”

What do these mobocracy leaders want to put in place of the American system of government? The answer is a Marxist system akin to a “1984” scenario with people like them calling the shots, of course.

A critical step toward this nightmare world is to rid the nation of any record of any kind of troublesome reminders of historical facts on the pretext that these are ‘racist.’ This is an attempt to ‘cancel’ American history in order to remake the future in their Marxist model.

The Attempt to ‘Cancel’ History

In recent weeks these calls for ‘cancelation’ have been amplified both in volume and scope to ranging from ordinary people losing their jobs to rage mobs destroying historical monuments, mostly statues, of any figure even perceived as racist even some who fought against slavery. In fact, statues of President Abraham Lincoln have been defaced and in one case there is a petition demand endorsed by the mayor of Boston, Massachusetts to remove the Emancipation Memorial featuring a statue of Abraham Lincoln and a newly freed slave.

It is interesting to note that the Emancipation Memorial was financed by former slaves who wished to commemorate the moment of their release from bondage. The fact that this actually dishonors the liberation of blacks seems irrelevant to the Leftist mob on their march to dominance.

Moreover, statues and monuments of Presidents Washington, Jefferson, Grant, and Teddy Roosevelt are on the Left’s chopping block as well. One interesting fact is true about every name I have mentioned; none of them fought for the Confederacy.

Thus, those who would claim this rioting and monument toppling is simply a shot at racism are ignorant at best and malevolent at worst. That includes the surrogates of the Leftist BLM, the Democratic Party in America, whose leaders have already endorsed pulling down various statues and destroying monuments.

This is a critical move to attempt ‘canceling’ the American heritage and western civilization by lawlessness and brute force. It has gained momentum primarily as a result of frustration because of the phony pandemic panic ‘lockdowns,’ the incendiary spark of the George Floyd murder, and the racial and intellectual fraud of the “1619 Project” courtesy of the New York Times.

We are now seeing the fruit of seeds planted long ago, and newly nurtured by public academia through this fraudulent history released in 2019. As this journal noted in August of 2019,

Rewriting history is always a perilous proposition because it paves the way for future tyranny. It has been used as a prominent tactic by all Socialist and Fascistic movements from Marxists to National Socialists, aka Nazis, in modern history.

While the road to tyranny is now opening up for the Left, there is on crucial societal obstacle still in the path of their complete domination. That obstacle is the existence of an increasingly fewer faithful Judeo-Christians remianing in western society.

Until that vangard is defeated and forced into submission, the Left will not rest. The effort to do just that, as well as ways to counter the Leftists’ ambitions, will be the subject of part two.

Consider and answer me, O LORD my God; light up my eyes, lest I sleep the sleep of death, lest my enemy say, “I have prevailed over him,” lest my foes rejoice because I am shaken. But I have trusted in your steadfast love; my heart shall rejoice in your salvation. Psalm 13:3-5 [ESV]